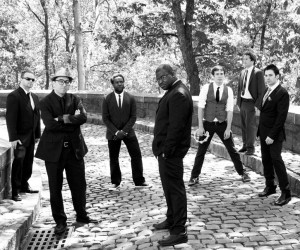 Motown isn’t everyone’s cup of tea. Neither is Nickelback. But New York City’s new kids on the block promise to leave you with a newfound love for catchy keyboard beats and a man shaking his tambourine. You might even be lucky enough to catch their show live in concert this weekend — just in case your Internet is down or want to snap your fingers in public.

Coming to British Columbia’s very own “LIVE at Squamish” music festival August 24, 25 and 26, is the Motown/Nickelback tribute band led by renowned arranger-pianist, Scott Bradlee. He has charmed the hearts of YouTube-watchers with the black and white upload of his Nickelback arrangement called “A Motown Tribute to Nickelback” which exploded back in November with an initial 250,000 YouTube hits.

The smiley sound-good-feel-good tune worked. A bit of fuss may have been created by those not wanting Nickelback to perform the Thanksgiving Day NFL football halftime show in Detroit, but it initiated Bradlee’s response, which was to produce an Detroit-themed alternative that recalled the glory days of Detroit’s Motown soul sound. And it wasn’t just those petitioning against Nickelback who took a liking to Bradlee’s groove.

Soon the band members of Nickelback themselves checked them out and spread the word of this “killer” version of Nickelback’s “How You Remind Me” song on their official Twitter feed. An invite was extended to the New York boy band, granting the opportunity to experience beautiful British Columbia and perform atop the Squamish festival stage (perhaps together with Nickelback?).

And thus the boys packed their keyboards and tambourines and headed northwest. Yes, in a band composed of leader Scott Bradlee, Andrew Baron Roland on vocals, Allan Mednard on drums, Adam Kubota on bass, Steve Ujfalussy on tenor sax and Ben Golder-Novick on alto sax, it is the man at the bottom of the pyramid who is actually topping the charts. Without question YouTube’s most famed tambourine player, the band’s Tim Kubart continues to gather YouTube comments, with many wishing they “loved something as much as that guy loves his tambourine.” Kubart plays up the adorable factor and like the classic Saturday Night Live “Cowbell” skit, you just can’t get enough of it.

In addition to this group’s growing stardom, rumours have quickly spread crediting the viral sensation for uniting Chad Kroeger of Nickelback with his newly announced fiancé, Avril Lavigne. Not too long after the couple had reportedly been spotted together last winter, Bradlee and his band released another Motown tribute, this time performing “Sk8er Boi” — arguably Lavigne’s biggest hit.

Whether or not the newly dubbed “Chavril” couple owes the boys from the Big Apple any thanks for their relationship status, most certainly due is gratitude for reigniting the Canadian flame amongst those trending in tributes on the internet.

Proving that it takes talent, timing, and a good-looking guy to play a tambourine, it’s not just about uploading your recorded home video these days. And if you’ve got what it takes, you might just get rewarded by a Canadian band like Nickelback.

Editor’s note: Jacqueline Podewils, originally of Kelowna, resides and works in New York City as a freelance journalist. Chad Kroeger, originally of Alberta, resides in the Bradner-Aldergrove area, has a good sense of humour and frequently contributes to local charitable causes.