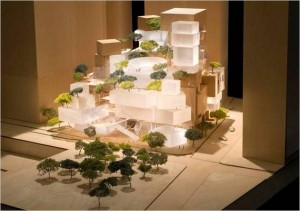 The Gehry may have jazzed up New York City’s skyline with its spiral swank of a residential building onSpruce Street. But visions for the talked-about Performing Arts center at the Ground Zero site may be unforeseeable until 2017.

Originally under design with a hope of creating a destination holding the title International Dance Center – and what a title that would be – not to mention location, the space was to hold theJoyceTheaterand would offer programming and performances in both a 1000-seat main stage and a flexible-in-size-and-seat stage.

But this idea of an auditorium is still in molding stages. According to the New York Times, on a phone interview Mr. Gehry declared, “The other program was grand and big, and it seemed in scale with the place,” he said. “We’ve got a smaller program now because of finances. I don’t take time to look backwards. We’ll make something out of it that works.”

In the opinion of dancer, what a privilege it would be to bring the disciple of dance to such a spot; to uplift and express through movement and life on the memorable block guarded by the new installment of the stunning Freedom Tower – dancing there would take on a whole new meaning.

Dance in the next few years may itself take on new forms, new meanings, new locations and prospective – but looking forward to this day ahead with such a touch as a Gehry touch, this dancer center sill sure enough have us all jumping for joy sooner or later in the heart and soul of Manhattan.