Returning from a trip to Indonesia to take in the ceremonial Balinese New Year, the ancient form of dance proudly expressed surrounding these celebrated times presents an awareness of the value dance holds in culture, tradition, and the understanding of each other around the world. Dance as a language translates through visual movement and is felt, not heard, from one soul the next. What an exquisite opportunity it was to be a part of something so beautiful, something so valuable to the people ofBali.

An exorcism of evil spirits symbolically takes place the night before the actual New Year’s Day. Giant efficiges have been created to appear as monsters by the people of the surrounding villages out of bamboo and other local materials. They take on a powerful, sculptural appearance. To the sound of loud music said to scare away the evil spirits, these gongs accompany the entertaining yet ceremonial procession known to the people as the Ogoh-Ogoh. It is parade-like and it is also a competition amongst the villages to see whose Ogoh-Ogoh is the best. They are all stunning to my eye, the strength of the men carrying these large objects only matched by the beauty of the done-up female dancers in front.

Performing a dance in front of the judges while the men shake out the evil spirits of the Ogoh-Ogoh, the hair, the makeup, the golden, embroidered outfits setting off the hot pinks and colorful tones… a woman clad and standing still is a spectacle in and of itself.Baliis beautiful, and so is its females and the tradition in which they take part in – its dance.

Balinese dance is not only traditional but religious, evoking Hindu rituals. It holds meaning; perhaps to welcome gods, or to host gods, the sharp, angular movements of intensity express a dynamism from tiny finger gestures to a look of the eye. It has the ability to hold you in a moment and capture not only your attention but your spirit – if only for a second, almost as if hypnotized by these movements, by this beauty.

The practice of these postures usually has the body positioned with legs half-bent, torso shifting from side to side similar to common-day dance isolations. Locking the body opposite the direction of the arms, this is also a good strength builder and is often seen inNorth Americaduring a typical class warm-up.

Nowadays tourists can take in a Balinese dance weekly, dances such as the Fire Dance are performed in a group setting for a small charge. New Years may only come around once but the spirit ofBaliand its expression through dance lives amongst its people’s beauty every day. Thus we continue to learn about each other through the forms we understand and something we love – dance. It is worldwide and it past, present and future. 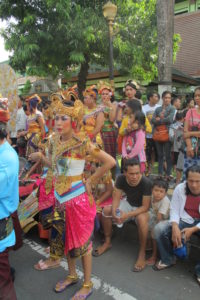