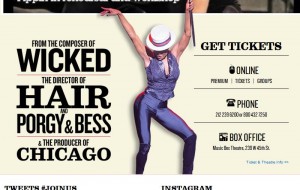 It’s amazing and it’s time; Pippin is back on Broadway! A dream of dance brainwashed Fosse style, this Broadway musical is legendary in the eyes of Musical Theatre-driven character dancers who bring an intensity and passion, structure and style to the world – completely elemental in dance perfection brought to existence.

Music by Stephen Schwartz, who wrote the music to Godspell and also Wicked, one of Broadway’s largest successes, and whose musical journey will incidentally be celebrated on April 12, 2012 at Carnegie Hall in a presentation called The New York Pops, this musical tells the story of a young prince on the search for the meaning of existence.

They say there’s always magic in the air on Broadway, and it looks like that magic’s back. Get your tickets now on telecharge.com and witness the inspirational Fosse phenomenon come to life on the stage with Pippin!