It’s said that if one looks in the mirror and the reflected image comes back distorted, the soul of the user is in danger of corruption; and if that mirror shatters, your cosmic penance is seven years of bad luck. Superstition aside, no one wants to be in the presence of a shattering mirror. Which is why En Pointe is bringing you shatterproof mirrors.

In addition to their safety (both physically and karmically) shatterproof mirrors are also lighter and brighter than plate glass.

Have you ever seen your reflection through such a mirror? Probably. You’ve probably worked out in front of one at the gym. Perhaps you’ve tried on a garment in a department store which provided something of such. Maybe you’ve been at a club and awed at the reflection casting down on you from none other than the tiled ceiling. If you are a dancer they’re incredibly useful in studios, as the clear quality isn’t lost and yet they can withstand impact.

In addition, you may have caught a glimpse of the mirrors on NBC’s hit show SMASH which used the shatterproof mirrors in one of the scenes. 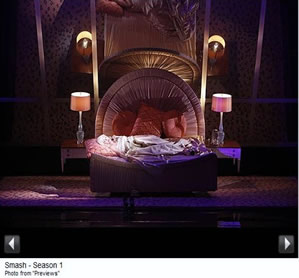 On wheels or on walls, these mirrors are beyond practical and are now accessible to you. After watching a quick youtube video…

I got the idea in my head that this would be PERFECT for a home closet! (Including my own!!) Having been looking for a room divider or screen to act as a door for my California closet in my studio apartment, I realized this would sub in quite beautifully – reflection in any room adds a certain great quality, including a bedroom.

Children’s playrooms and at-home gyms are other great rooms for accommodating a glassless mirror. Obviously studios welcome them! And theaters, sets, and salons could put them to great use as well.