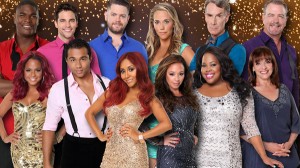 Returning to ABC for another dose of celebrity meets ballroom bliss, Dancing with the Stars goes into its 17th season tonight with a two hour premiere starting at 8 PM. As usual, the famed stars joining the dance cast – a cast of whom, by now, are practically bigger names than the “stars” themselves – are of a mixed bag ranging from Bill Nye the Science Guy to New Jersey’s very own “Snooki.”

Bill Nye pairing up with first-time professional partner Tyne Stecklein, we’ll see if his “ability to understand energy” will positively affect the chemistry between the two on the competitive dance floor. Stecklein, an American known for her performances in dance films such as High School Musical 2 and The Curious Case of Benjamin Button, may be new to TV but not new to the game. Look forward to seeing the tables turned as she attempts to educate Nye in the wonderful world of dance.

“Snooki” properly named Nicole Polizzi and known for her reality show success on MTV’s Jersey Shore, takes to the dance floor after having given birth just last year to her first child. Paired with Sasha Farber who, too is a first-timer to the Dancing with the Stars stage, we’ll see what kind of live television drama this attention mogul can cook up.

The remaining line up includes Leah Remini, star of syndicated hit The King of Queens who pairs with Tony Dovolani. Amber Riley from TV’s performance-oriented hit Glee will pair with show favorite and past champion Derek Hough. Jack Osborne, TV anchor will partner with Cheryl Burke who season after season takes her team to the top and has many “mirror ball trophy” championships under her belt. Christina Milian, known for her role on NBC’s The Voice as the social media correspondent will partner with Mark Ballas, athlete Keyshawn Johnson with Sharna Burgess, Valerie Harper with Tristan Macmanus, Bill Engvall with Emma Slater, Brant Daugherty with Peta Murgatroyd, Corbin Bleu with favorite Karina Smirnoff, and last but not least, Elizabeth Berkley Lauren with Valentin Chmerkovsky.

Returning as host is Tom Bergeron accompanied by Brooke Burke; make sure to tune in and dance along on your En Pointe PortaFloor as we kick off a new season together of Dancing with the Stars!